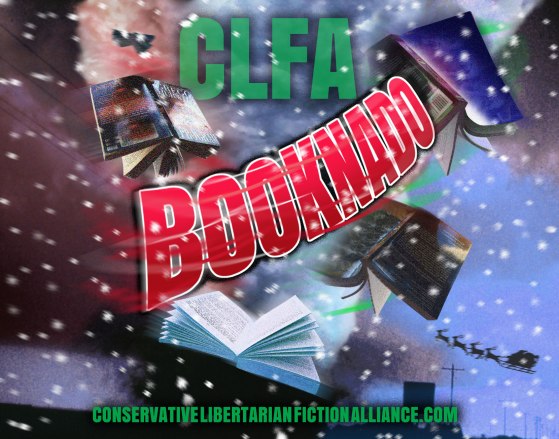 A furious blast of fiction freedom blows away the tired, the formulaic, the predictable, and the didactic! Click on any of the images below to learn more and buy the fresh fiction listings in the December 2016 installment of the CLFA Booknado!

Planet of the Magi: A Space Fantasy by Erin Lale
Expected to grow up to become a Magus, a wielder of dark magic, Dije rebels by seeking the forbidden white magic — and then faces an alien invasion.

Quest to the North: A Minivandians Tale by Tom Rogneby
After the battle that ended the first book in the Minivandian’s series, Ruarin and her companion search for their friend in the deadly lands to the North.

Scout’s Law by Henry Vogel
Terran Scout David Rice put the long-lost colony of the world of Aashla back in contact with the rest of the galaxy. Now he must fight to protect Aasha’s early-industrial civilization from galactic skullduggery. Fourth in a series of standalone novels.

The Bleak December by Kevin G. Summers
A supernatural storm has fallen on New Hampshire and a cult leader is whipping the people of the Granite State into a frenzy. Snow is piling up in the Great North Woods and the dead walk among the trees. Now a handful of rugged folk from the North Country are all that stand between a tyrant and his plans for dominion.

Prime Deceit by Robert A. Gore
A fountain-of-youth hormone sparks a sinister government conspiracy. How low will the high and mighty go? This scathing satire takes aim at power, corruption, and other idiocies.

Glory Boy by Rick Partlow
Super-soldier Caleb Mitchell is asked to sacrifice his very humanity to protect his people. But when his home world is threatened by the Tahni, will he throw away his career and risk everything to save the people who turned their backs on him?

Wine into Water: A Pastor Stephen Grant Novel by Ray Keating
Former Navy SEAL and CIA operative Pastor Grant is pulled into action to help unravel a mystery involving fake wine, murder and revenge. How will he take on evil while staying rooted in his life as a pastor?

Look to the Stars by Kal Spriggs
Space Western: A smuggler looking for redemption must deal with his own dark past.

$1.99 (December 12 and 13)
The Hidden Truth by Hans G. Schantz
They killed President Gore, subverted science, rewrote history, and corrupted society. Now he knows. And he’ll prove it, too, if they don’t kill him first.

99¢ (December 12 and 13)
Far Flung (novella) by Laura Montgomery
In the very near future a seastead offers consumers a choice in governing systems. Navy Captain Adam Tenney’s daughter takes that offer, but what can he do for her when pirates threaten the seastead, the U.S. refuses to recognize it, and he is trapped in a desk job on land?

NOTE: ConservativeLibertarianFictionAlliance.com is a participant in the Amazon Services LLC Associates Program, an affiliate advertising program designed to provide a means for sites to earn advertising fees by advertising and linking to Amazon.com.

NOTE: We at CLFA have not read all of the books listed, though we have made an effort to screen them for quality. We recommend reading the free excerpt at the beginning of any book before buying.