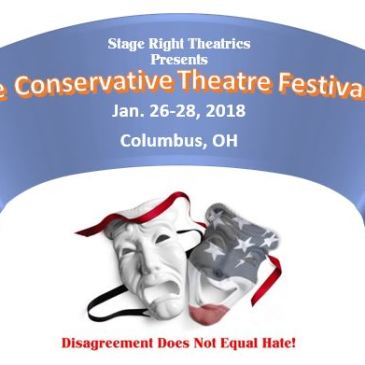 CLFA member Robert Cooperman has committed an outstanding act of vision and leadership. His organization, Stage Right Theatrics, has pulled together a festival that produces a range of theater pieces that exemplify a conservative worldview—for the second year in a row. “Why am I doing this? I was tired of the obligatory attack on conservatives … END_OF_DOCUMENT_TOKEN_TO_BE_REPLACED

CLFA member Robert Cooperman reports that there are still a few tickets left for his inaugural festival of Conservative theater. And at a mere $10 for half a dozen plays, the festival promises to be an incredible deal for those on the right who are sick of seeing their values shut out of a culture they love. … END_OF_DOCUMENT_TOKEN_TO_BE_REPLACED

The Conservative Theater Festival in Columbus, Ohio is looking for playwrights. The festival is the brainchild of Robert Cooperman, a native New Yorker playwright and Adjunct Professor of English and Theatre at Ohio University, Lancaster. Inspired by the courageous 2012 Republican Theater Festival in Philadelphia, Cooperman decided that his hometown of Columbus was ripe for such … END_OF_DOCUMENT_TOKEN_TO_BE_REPLACED